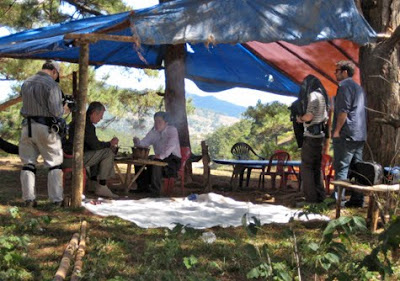 Last night, Cooper and I watched a couple of hours of TV that was interesting and educational and all those things, but that I wasn't really excited to watch.

First up was the Vietnam Central Highlands episode of No Reservations. As we queued up the DVR for that show, we did so with a noticable lack of enthusiasm. Part of it was general Bourdain fatigue, brought on in part by Baltimore loyalty. But part of it had less to do with the host and more to do with the region under study.

When we realized it was a Vietnam episode, our mutual reaction was, "AGAIN?" It seems like Tony's spent an awful lot of time in that country and we know he loves it, but at some point, shouldn't he just visit on his own dime?

Mid-way through the show, we started talking about the fact that even though we're unexcited about multiple Vietnam (or China) episodes, we're totally warm to multiple France or Spain episodes. We chalked it up to having a better understanding of the geography, history and culture of western countries like France and Spain. Which means that watching an episode on a part of Vietnam we'd never heard of is actually probably more valuable to us than watching another show on Provence or San Sebastian.

However, he's a little short-sighted. Maybe it's necessary for his success, but he considers it a failure of communication (or something) that he can't get through to one particular lady who works on his community farm and typically buys industrial farmed chicken.

The lady, named Hailey, happens to be the most rational person on the show. She's made it very clear that given the choice, she'd love to buy free range chicken. Who wouldn't? However, it's not an option for her budget. She does soften a bit at the end, when Fearnley-Whittingstall prepares a risotto with the leftover bits from a roast chicken dinner (as an aside: the leftover chicken used had WAY more meat left on the bones than our typical leftover chicken carcasses do). But in the end, she's practical. She can't afford it, so she's not going to buy it. I just don't think anyone can fault her for that.

That said, at the end of the episode, I said to Cooper, "This does remind me that it's important for people who can afford to buy free range chicken to do so, because that makes it less expensive for everybody in the long run."

One thing the episode did not touch on, surprisingly, is that free range chicken tastes better than regular chicken. I think it does, but then again, maybe that's just the sweet taste of assuaged first world white guilt.