As usual, this review is written based on just one visit to the restaurant. Also, in this case, the visit was comped by the restaurant and they knew I was there. So make of that what you will (though I will also note that our waiter didn't actually know we were being comped, suggesting that maybe I am actually not that famous.)

So...Milan. It's Little Italy's newest and - I'm nearly positive - hippest restaurant. Last week, Cooper and I met up with Liz and Nathan Stambaugh for a big, bloggy dinner. We also saw Xani and Erin and Jessica while at the restaurant - it was a big night out for Baltimore bloggers.

From the outside, Milan looks pretty cool, with its white facade and glowing red "M" logo. Inside, though, it's much, much cooler and certainly doesn't look like your average Little Italy red sauce joint. I'm kicking myself now for not photographing the all white lounge area that's accessorized with a rose-bedecked fireplace. It's gorgeous and has the kind of swanky vibe that the city is sorely lacking. Milan's owners are, literally, just back from Milan and in creating the restaurant concept, they wanted to mix the fashion-meets-food vibe of the Italian city. I think they got it right.

Upstairs, where we sat, tables (marble, I loved them) are positioned just close enough to feel festive but private. This is no Petit Louis/make friends with your neighbors kind of environment. In fact, a few of the tables sit in little alcoves surrounded by beads. Overall, very sexy environs. Very hip, perfect for the kind of date that needs impressing.

So, once we got settled and stopped yapping about how glad we were to finally get together, we took a look at the drinks menu. We all bypassed the eight margarita and eight mojito options (maybe if it wasn't so snowy out) and I ordered an "Italian soda" - ginger ale and Stoli vanilla. I'm not much of a vodka drinker but I kind of loved it.

The wine list was a good one, too, with a decent collection of wines by the glass and a wide range of prices. In fact, it's grouped by color and price and I totally respect how simple the organization is.

So, drinks taken care of, we tackled the menu which, I have to be honest, was a little overwhelming. There are a lot of options and it's slightly difficult to figure out a strategy, especially when you're eating to blog (which I usually am). Overall, the menu includes a Baltimore-friendly mix of conservative and interesting dishes, but there are a lot of them to choose from.

The menu is divided into a bunch of categories - small plates, salads, flatbreads, pasta, "house mix" (aka meat), and seafood. In addition, we received a menu labeled "sushi Italiano," or Italian sushi - a concept I didn't quite grasp right away, but that is apparently hot in Milan.

Liz and I decided to make our appetizers from the sushi menu, so I started with the Milan rotolo, which includes fried calamari, yellowfin tuna and white tuna: 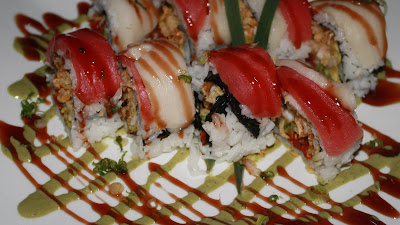 The sauce might look like soy and wasabi, but it's actually basil pesto and balsamic. I was skeptical, but I'm sold. I really liked the combination of flavors and after eating the roll, it didn't seem gimmicky, but smart and logical. 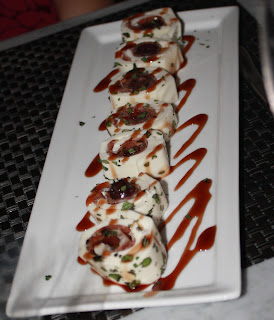 Liz ordered the antipasti rotolo, which is basically mozzarella, proscuitto and soppresata, all rolled up. It was also good - what's not to like? - but maybe not as interesting (or sushi-like) as the Milan roll.

The boys were adventurous in their own way - Nathan possibly most of all, since he ordered something oxymoronically called veggie meatballs - and he is certainly not a vegetarian. They surprised everyone with their flavor and kick, though, so maybe we shouldn't be so quick to judge.

Cooper's order is, apparently, a favorite among the staff and other customers. He got the polenta di Pisa - fried polenta cakes and Roma sausage stacked in a tower with red pepper pesto and basil oil (the owner admits that the construction usually leans about as much as the actual tower in Pisa): 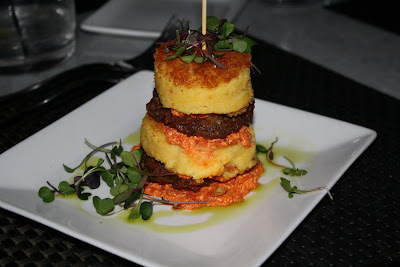 Cooper was one of the lucky ones - his tower made it to the table still standing. Unsurprisingly, given the ingredients, the flavor was great and the presentation was fun.

For my entree, I ordered risotto with mushrooms and scallops: 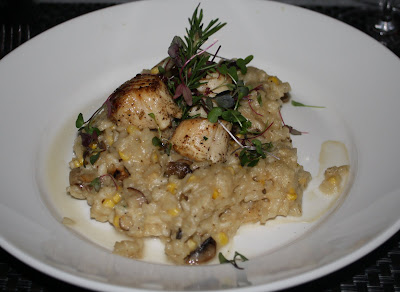 The scallops were cooked perfectly and the mushrooms lent the risotto a pleasing earthiness. My only complaint about my entree is that there was just too much of it. Too much risotto - I felt kind of wasteful by the end.

Cooper had the filet with walnut gorgonzola butter: 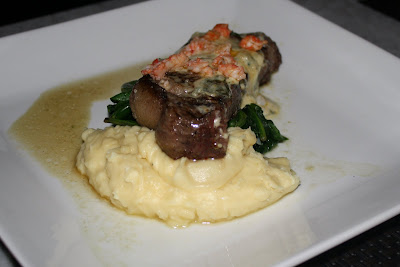 Cooked perfectly, nice flavor, and the butter wasn't overwhelming, which it could've been.

Liz had the veal porterhouse, which would've been my order if we hadn't just had veal for dinner a few nights before. Her meat was cooked so perfectly - it was really tender and just fantastic. I liked my scallops, but I'd be lying if I said I wasn't a little jealous.

And Nathan had the lamb manicotti - another bold choice from him, since the dish included hummus and none of us could figure out quite how that would work. The lesson we learned there is that we should trust the chef because it totally did work.

None of us was still hungry by the time dessert rolled around, but we managed for the sake of the blogging. Liz had a creme brulee that she reported was just the right consistency and Nathan ordered a trio of gelato that was a) pretty and b) tasty.

Cooper went big with a chocolate fudge cake with hazelnut butter that was surprisingly light considering it's description: 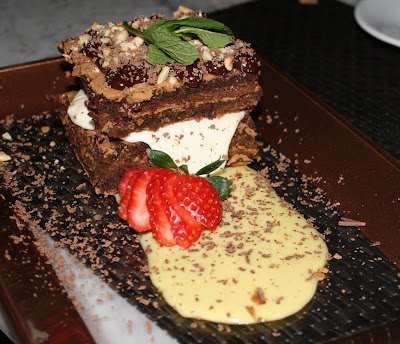 I, on the other hand, decided to skip dessert in favor of a cheese course, and I'm glad I did. The cheese combination was a good one and I especially loved the Talleggio and the ricotta with the honey: 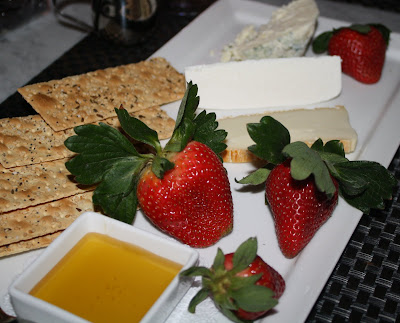 I could actually see going to Milan just for the cheese and a few cocktails - it certainly has the right vibe for that sort of night.

A note on the service: it was good. The meal, overall, was paced pretty slowly, but that's because we were talking (Cooper and I were listening to a lot of Nathan's stories...which involve fire).

So, the verdict? I'd definitely go back, though it's not really an everyday kind of place for a couple with a toddler. As soon as we got home, though, we mentioned it to Kyle and Mary and Mike and Alicia, all of whom are very stylish and like eating in equally stylish surroundings. They'll all like Milan very much. In fact, I think it may even fill a gap that Ixia's closing left, especially for Kyle and Mary, who especially liked the upscale-cool Ixia vibe.

I'm sure it's been a tough month or so to open a restaurant in the city, what with all the miserable weather (Milan is lucky to be very close to the Little Italy parking garage and they have valet, so at least parking's not an issue). I'll be keeping my fingers crossed that this spot does well, proving that Baltimoreans do, in fact, like a nice upscale experience.

Thanks for sharing the restaurant review : Milan. I found it interesting. Just curious to know if they offer wine tasting.

That all looks very good. I hope it sticks around long enough for Neal and I to visit someday. :)

Ha! Seriously, though, I hope it sticks around, too. The food is good but I worry for them about the ease of opening an upscale place a) in this economy and b) in this weather.

Looks like a great place to dine. Thanks for the review -- great photos.