How to Host an Amazing Baby Shower

1. Start with a fun expecting couple: 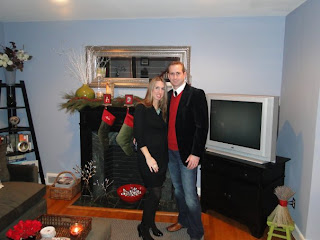 That's Mike and Alicia at the Carol and Crawl in early December (not at the shower, which was at our house over the weekend). Somehow, Alicia still looks just like that, even though she's now about seven months pregnant. 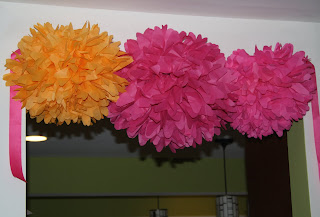 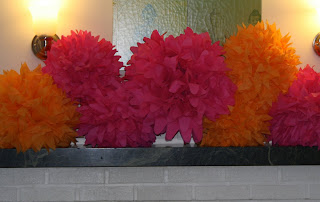 The decorations came from Etsy seller PomLove. They arrived flat - Jen and I spent a couple of (wine-soaked) hours fluffing them on Friday night, then spent a few more hours trying to keep the kids from crushing them. We hung them all over the house, from the chandelier to the fireplace mantle to the moose rack. They were a huge hit.

3. A cake from Patisserie Poupon: 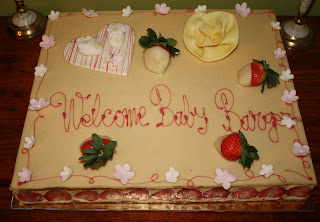 Specifically, the Frasier cake, which is Alicia's favorite, and cannot be beat. As an aside, there is nothing cuter than a three-year old in a fancy French bakery. Dixon was allowed to pick something out to take home. He chose a dark chocolate "purse" filled with chocolate mousse...because of course he did. No palmiers for the tiny sophisticated palate. 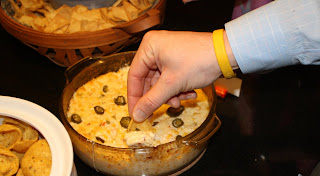 It's delicious, it's easy, it's disgustingly unhealthy. But worth it. 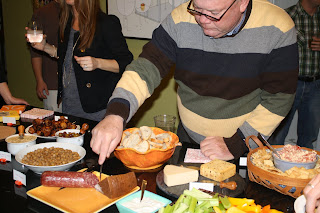 That's Alicia's dad, the famous Bill Kelly, digging into the sopressata. He also made the shower playlist, which was a big hit. And by that, I mean, there was dancing. 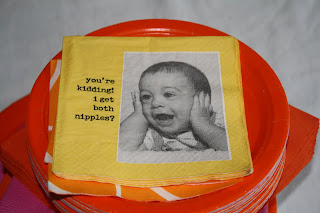 Also courtesy of the grandfather-to-be.

7. And finally, a father-to-be with mad yoga skillz: 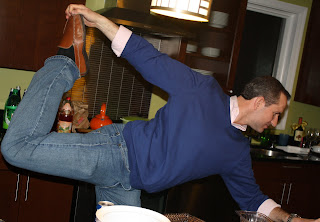 Mike is so cool, huh?

Really, it was a fantastic shower, and much more frat partyish than the average baby shower (including finishing a keg, which we didn't even do at the Carol and Crawl!). It was at our house, but we were officially co-hosting with Jen and Bill and Will and Karen (who designed the invitations). On top of that, we had tons of help, especially from Alicia's mom and aunt and Mike's mom.

Since it's a food blog...the menu included:

We have tons and tons of food left, somehow (more drinking than eating, I suspect) - but that's OK. Overall, it was an absolute blast. The Bargers and the Kellys are two really fun, excited families and our friends are an equally fun, excited group (if I do say so myself). If there's one thing for certain, it's that Baby Barger is coming into a busy, super-fun world. She's not going to know what hit her.

I found your food blog going through a few links. Glad I ran into it. Didn’t know that the food blog/recipe community was so big online. I love your posts!

Those napkins are adorable and hilarious!