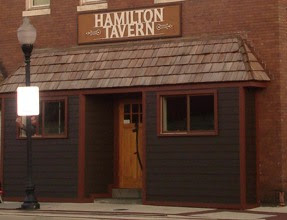 This review originally appeared on Examiner.com back in March.

Last night Cooper and I found ourselves with an unexpected babysitter and no dinner plans - a pretty nice surprise all the way around. We weren't up for a big, fancy dinner, but we wanted to go out, so we headed over to Lauraville to Hamilton Tavern (5517 Harford Road, 410-426-1930).

I've been anxious to try Hamilton Tavern ever since it opened. Word was that it's a fun bar with interesting drinks (appropriate for a place owned by a Tom Creegan, one of the co-owners of Brewer's Art) and a brief, but excellent menu. I'd also heard that it's loud, loud, loud. So we came prepared for that.

Overall, Hamilton Tavern didn't disappoint. My first impression was that it's a very cute place - rustic decor, lots of wood, feels very pubby (in a good way). Cooper was happy to see Brewer's Art's famously potent Resurrection on tap and I was seriously impressed by the list of wines by the glass, which is short, but inexpensive and experimental. I had a couple of glasses of a $6 Malbec that was really pretty great.

The only real glitch in our whole meal came at the very beginning, when we were waiting for a table. The place was full when we arrived, but we only had to wait a minute. That was fine, and we were just going to grab a drink at the bar (we'd also run into my friend Dave as soon as we walked in), but when we tried to catch the bartender's eye, she assumed we were asking about our table, so she'd say, "It'll be just a minute" then move on to something else before we had a chance to order. Then, when we did sit, at a table in the back corner, it took a few minutes for our waiter to get there.

Little things, though, in the grand scheme of our visit. Once we sat, we had a clear view of the whole space, which really is very nice-looking. Plus, in our corner, the noise level wasn't so noticeable. We spoke to each other in totally normal tones and had no trouble hearing (this might be a bigger issue on weekend nights, when the bar is more crowded. I don't know.)

Before dinner, we ordered the fried pickles, served with a goat cheese sauce, and half a pound of steamed shrimp, which came with hush puppies and onions. The shrimp were excellent - perfectly seasoned (which is, I think, harder than it sounds). The pickles were great, too. Really hot at first, but once they cooled off a little, the tangy-fried combination was fantastic. I'm a fan of both pickles and anything fried, but these were especially good. I liked them better than the fried pickles I had at Rocket to Venus last year.

For dinner, I went with the burger, which is made with beef from local sweethearts Roseda Farms, and it did not disappoint. It was perfectly cooked and perfectly tasty (then again, how bad can a cheeseburger be?). Cooper's oyster po'boy delivered as well, though he did say he wished the sandwich was a little juicier overall. I tried an oyster and while it might have been a little more fried than we both like, it did have nice flavor. We both skipped the potato chips - I got a salad (which was fine, but I wish I'd gone the full glutton and just gotten the chips) and Cooper had the onion rings. I love onion rings, but as I said to Cooper last night, they usually all taste the same to me - like the ones you can get at Burger King. These were different, though. They were crispy and battery, of course, but the (very sweet) onion wasn't at all stringy and when we bit into one of the rings, the whole onion didn't slide out of its shell. THAT was a nice surprise.

For dessert, we split a chocolate chip and Bailey's bread pudding that was good, but maybe could've had a little more Bailey's flavor. But we were full anyway, and that's nitpicking.

Overall, it was a great meal, a cute place, and good service (we did like our waiter very much). Not terribly expensive, either - we had two drinks each, two appetizers, two entrees and one dessert and the total bill was $60 plus tip. Not so bad. More than worth it, considering the quality of the food and the really great atmosphere. I think it's the perfect restaurant for right now - fun, interesting and not too pricey.