Here is the tale of the pig we roasted and ate one week ago today...
Monday afternoon - Cooper goes to pick up the pig at a butcher near Chestertown (yes, almost two hours away from Bethany). It arrives in a smallish box, and wrapped in heavy plastic. We all gather for the initial unveiling: 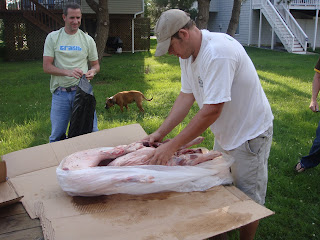 Using a mojo marinade and the injector recommended by the La Caja China people, Cooper injected the pig for flavor (ultimately, he wasn't thrilled with the flavor and he's working on something of his own for our next pig): 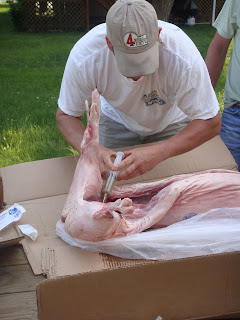 Tuesday, mid-day - Cooper and Bill prep the pig for roasting, flattening it out and placing it between the metal grates that come with the box, then laying it on the bottom of the box: 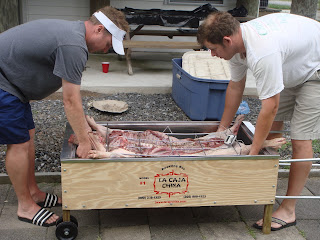 The metal top and charcoal tray go on top of the box: 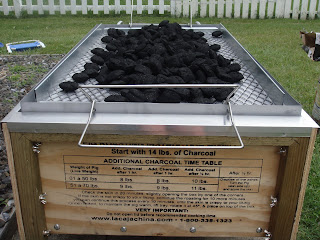 After a couple of hours of cooking, during which Cooper added charcoal at 30 minute intervals, Cooper and Mike carefully lifted the top off the box and got rid of the ashes, before flipping the pig and scoring its skin, then letting it cook for another 30 minutes, skin-side down: 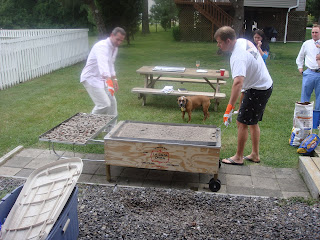 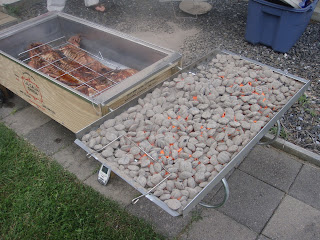 And finally, the pig was ready: 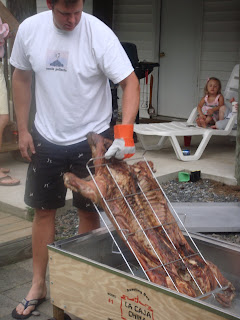 Alicia celebrated in her Andy Nelson's sweatshirt (she won it!) while we ate, mostly with our hands: 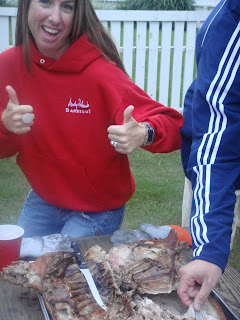 And what did the kids do during all of this? We had to keep them away from the coals, so Alicia sat them on a lawn chair with a "kiddie cocktail": 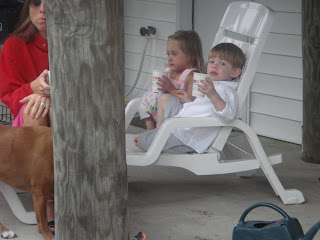 Even though Cooper wasn't thrilled with the marinade, we all agreed that the texture of the pig was amazing. Plus, the actual cooking process only takes about four hours. My childhood pig roasting memories all involve my dad getting up around 5 am to start cooking, so four hours sounds like nothing to me.

Overall, it was a fun experience. And now we have a Caja China! Which really means that we've just kicked off the Summer of the Pig chez Pollard.
Posted by Kit Pollard at 9:36 AM