Entertaining Friday: What I've Been Up To

Though this is, ostensibly, a food blog, it's been a while since I've written about food I've recently cooked or eaten. I have been doing a lot of cooking (and eating) lately, and much of it is in the context of entertaining. Here are some of the highlights:
Pasta salad with shrimp, artichoke hearts, basil and tomatoes. I started out with this Serious Eats recipe and kept adding stuff until I felt like stopping. It was great. Over Memorial Day, I made the same salad minus the shrimp and artichokes. It's got a lemon juice sauce, so the flavors are super bright and summery. Highly recommended: 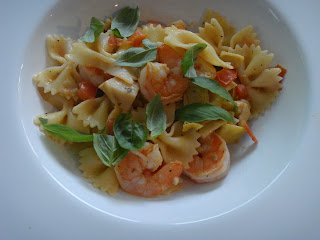 Last Sunday, Cooper was in a cooking mood, so he decided to smoke a pork shoulder. He'd never smoked anything on the grill before, but after an hour or so with his trusty Weber's Big Book of Grilling, he headed out to the grocery store with a rub and a sauce in mind, and five or six hours later, we were enjoying a delicious pork barbecue sandwich: 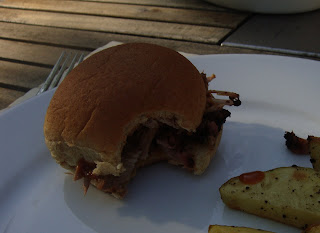 Jen is busy sunning herself and drinking morning margaritas with her college friends in Florida, so Bill and Maddy and Will came over for dinner last night. It was hectic, except for the quiet 10 minutes when, as it turns out, the kids were emptying all of the baskets in Dixon's room, throwing old burp cloths on the floor. Fortunately, we consoled ourselves with crab cakes (the Annapolis Junior League cookbook recipe with slight modifications) and maybe the prettiest asparagus ever (just boiled with a little lemon juice): 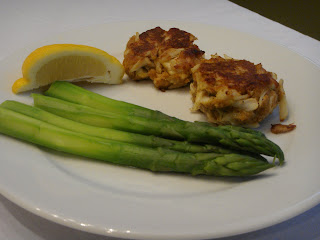 And, finally, some pictures of Dixon. Just because.

Hanging out on the deck, talking on the phone: 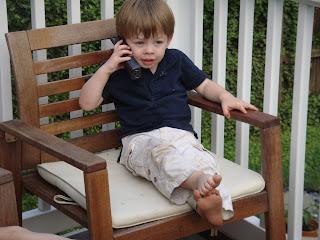 In the side yard, "fixing" something, while we're on the front porch: 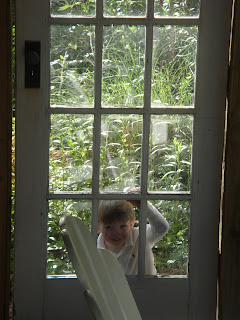 Um, if you could just frame that picture of Dixon on the phone that would make for some awesome photo comparisons in like 10 years. He looks like he's on the phone making some sort of big business deal.

He is very important, you know.

He was actually on the phone with Cooper's mom, doing his usual on the phone thing - listing all of his tools.