Every year for Memorial Day weekend, Mike and Alicia head up to Alicia's family's Keuka Lake house to hang out with the Kelly clan. This year, in addition to the usual sunset cruises, camper of the year trash-talking and general frivolity, the whole family did it up Bobby Flay-style, with a Friday night burger throwdown.

Everyone was invited to join and the whole group voted on which burgers tasted best. (SPOILER ALERT) Alicia won. But the contest isn't over quite yet. The Kellys asked everyone's favorite food blogger (that's me, in case you were wondering) to crown winners in two additional categories: ingredients and appearance. 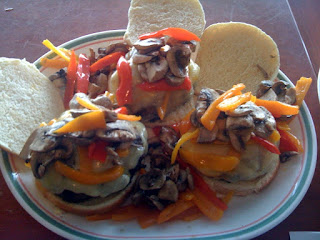 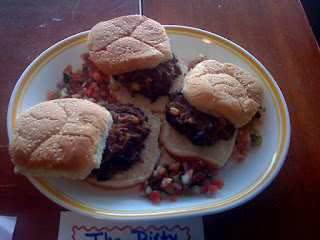 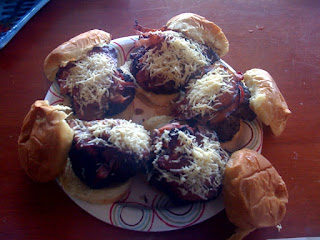 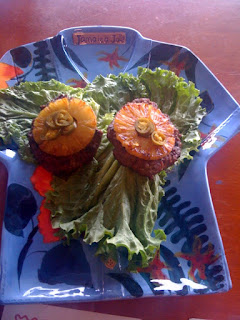 Barger's Benedict Burger
Seasoned ground beef topped with a grilled slice of Canadian bacon, a fried egg, and Havarti cheese and hollandaise sauce on the bun 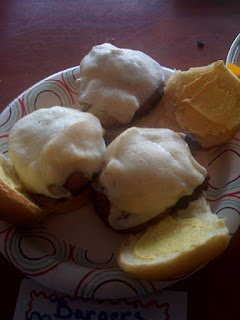 Alicia, her winning burger, The Insider, and her matching t-shirt
Unsurprisingly, a simple ingredient list wasn't enough for everyone's favorite Camper of the Year ("boys AND girls!"). She provided a full-on, menu-style description:
"The Insider: A departure from the original bacon cheeseburger.One bite into the molton, "baconny" lava and you will never be the same. The innovation of the classic toppings is what makes this burger a winner. Two very thin burger patties with sliced American cheese and crumbled bacon placed on one patty and then covered with the other and sealed tightly creates a pocket of melted cheese. The ground beef was seasoned with a variety of spices including garlic, cracked ground pepper, salt, etc. The burgers were topped with cajin seasoned and fried Vidalia onion slices." 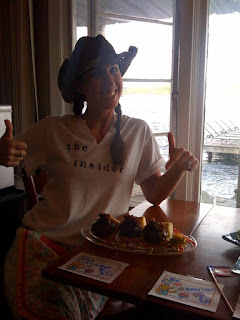 And my verdicts? After much careful deliberation (really, I got all of these descriptions and photos days ago), the winners are...drumroll please...
Appearance: Mrs. Kelly's Hot Hawaiian
Ingredients: Barger's Benedict Burger
It was a tough call on both counts. Everyone obviously did a great job and the entries were both creative and well-executed (then again, I know the Kellys and I expected nothing less).

On appearance, it really came down to the accessories and the humor. Mrs. Kelly went the extra mile with her plating and that kind of effort deserves a win. Plus, everyone loves a hula girl.

Judging ingredients was tougher. Here, I thought in terms of creativity and how good the burger sounded. I asked myself, would I order this? For that alone, I almost chose the Sa'Lotta burger. I'd order that in a heartbeat. And I like the incorporation of different ethnic and regional flavors into the burger, as well - that's the kind of thing that often works out well for Top Chef contestants, and there's a reason why.

In the end, though, Barger and his Benedict edged out the competition because his concept takes something mainstream - the fried egg-burger combo - and builds on that in a creative way. While I'm very sure I could never actually finish a Benedict burger, I think it's really not a bad idea.

You know, this is not the first throwdown I've judged. I'm beginning to feel like something of an expert. Anybody else out there in a cook-off kind of mood? I'm available for parties and awfully cheap. You can totally pay me in drinks.

This is awesome. Mike will be really happy!!! AKB

The fact that cranberry was not an ingredient in any of these recipes is a travesty! OSC

The balsamic vinegar ruin my burger and negated all my spices - the prosuto was great and the asiago to sharp for the average taster - but the onions did me in. You may never get a shag lesson. Bk

Those look like delicious burgers to me. OMFG, I want that last burger especially. The Hawaiian reqlly intrigued me, too, but they all look good.

Ah man a burger throw down that is a wicked idea! I was only in USA for a couple of years but I have to say Bobby Flay was easily my favouritte chef! Nobody over here in Europe really knows about him! Great looking selection of burgers you have going on there!

I just googled Hamburger Throw Down since we are planning a neighborhood Throw Down this summer and your website address popped up- as I am reading the info. the girl in the photo looks oddly familiar so I click on the highlighted names of Mike and Alicia- and up pops photos of Mike and Alicia who are basically related to me in a friend of the family kind of way, since Mike's Dad(Uncle George) is my God Father- our Dad's grew up together! I yelled "Holy crap- that's Mikey!" Would this be a six degrees of Mike and Alicia moment?
Tell them the Higgins from Massachusetts all say "hi"! We miss them.
You have a very fun site-you've been added to my favorites- what a great job you have-your Throw Down advice will be put to good use this summer and tell Mike his burger sounds like a heart attack on a plate! Enjoy!
Val