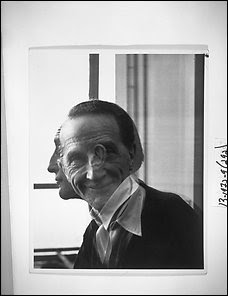 The Dada movement has always appealed to me. I'm into the humor, the nonsense, the vacillation between being intellectual/theoretical and not taking anything seriously at all. It's no surprise, then, that I'm a fan of the absurd work of Marcel Duchamp.

The double-exposed photo of the artist above, though, has always kind of creeped me out. I think it has something to do with whatever Nick Bantock book it's used to illustrate (I can't remember which). As much as I love Bantock books, they always leave me feeling a little unsettled. Which, I think, they're probably supposed to do.

All of this is a long way of saying that I enjoyed Blake Gopnik's article on the Duchamp show at the National Portrait Gallery. It's not long, but it's an interesting look at Duchamp's concept of identity, using the show's 100 portraits (and self-portraits) of the artist as a backdrop. The key quote, as I see it:

A portrait can't get at the essence of its sitter -- because such essences, Duchamp says, do not exist.

So, then, how is this about food? I'm not quite sure, but I've been trying to connect that last quote - about essences - to ingredients. Because I think that while Duchamp's point is partially valid - in today's parlance, every human can create his own brand - I also think it's impossible to completely erase the core self in favor of that brand. Duchamp may have created new identities for his portraits, but dada was such a part of his being that no matter how far he departed from his "usual self", the simple act of departure pulled him back.

Just like with food. You can dress up an ingredient, make it work a different or unusual way, but at its core, it is what it is. It'll do what it's made to do.

Too much of a stretch? Probably, right? But still, interesting article. And a show I wouldn't mind seeing.
Posted by Kit Pollard at 6:48 PM