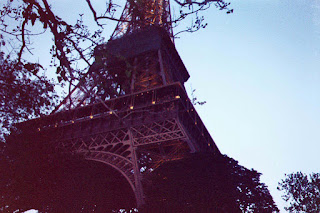 Look, I love Paris as much as any other basic American girl - a lot. But even I have had my fill of "do this like a French girl" stories.

When French Women Don't Get Fat came out - way back in 2004 - it was celebrated, and rightly so. The author, Mireille Guiliano, is insightful, gracious and engaging and at the time, the "French woman" thing was fresh and new.

But here we are twelve years later and writers are still beating that same old drum. Yes, Paris is still thrilling. And I know these articles are getting clicks and that I am 100% part of the problem...because some of those clicks are coming from me.

I don't even want to link to the article that set me off this morning (it was about throwing parties). It's not that it was a bad article, per se. The advice was all good (don't feel bad about buying dessert vs. making, the quality of conversation is more important than the quality of anything else, ply them with booze). The writing was perfectly fine. I'm sure the writer herself is great. But the underlying notion - the shorthand use of "French" to mean "expert hostess" - that grates. It's tired.

Interestingly, the opposite version of this article - the one proclaiming French food culture all but dead as a global influence - is almost as prevalent as the "like a French girl" articles are.

The demise-of-culture articles have more depth, though - including this one, by Jon Bonne, published earlier this week on Punch.

The gist of the article is this: French cooking, particularly outside of Paris, is mediocre. It is stuck in the past and kept from advancing by the sentimental notions and expectations that diners - from the French to the Americans to the rest of the world - have about French food.

The author holds this in stark contrast to the current wine scene in France, which he describes as dynamic and exciting. He gives a shoutout to cheesemakers, too, noting that the best ones manage to do something very difficult, as they honor what makes French cheese historically great, while still celebrating innovation.

As a country that has been, historically, celebrated for its food and entertaining culture, France is in a tough spot. Embracing innovation is tough for any individual or entity, particularly ones with storied pasts. And it's not like every old restaurant in France feels boring; when we were in Paris two years ago, we basically did the Hemingway tour, eating at a bunch of the author's old haunts, and the food wasn't avant-garde, but it was excellent.

I understand why France falls back on its laurels and writers, especially American ones, keep writing those "like a French girl" listicles. But really, for the sake of France, it's time for all of us to move on.
Posted by Kit Pollard at 8:06 AM