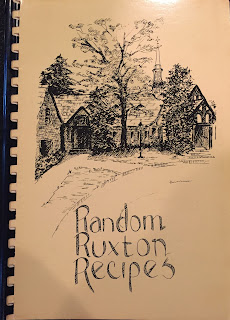 Glossy, chef-driven cookbooks are great, but as far as I'm concerned, when it comes to collecting recipes, there's just nothing better than an old-fashioned neighborhood cookbook.

My mother-in-law knows exactly how I feel about this - which is why she occasionally surprises me with gifts from her own personal collection.

Her latest gift to me is this fabulous piece of history - Random Ruxton Recipes, compiled by the Cook Book Committee at Church of the Good Shepherd and published, as far as I can tell, in 1979. The front matter mentions, though, that some of the recipes included were pulled from the original 1953 edition of the book.

Generally speaking, the years between 1953 and 1979 are not known for their culinary strength. And though there are some useful classics in this bunch, there are also a whole lot of recipes that rely on canned vegetables and the kind of processed foods that...well let's just say chances are you're not going to find many of these recipes on most Ruxton dinner tables today.

Case in point - this gnocchi ("gnocci"?) made with cream of wheat and American cheese:

I removed the name of the lady who contributed that because...this is Baltimore. She (or her kids) probably still live here. And I'm fairly certain none of them should be held responsible for this. It was the 70s. This is what people did.

Mid-century culinary atrocities are only one part of why I love these cookbooks. They're also great repositories for staple recipes that might otherwise be lost to history - like this one, for Tomatoes Elkridge:

I'm sure generations of Elkridge members loved these tomatoes, so it's nice to preserve the recipe.

In this particular book, there are lots of little clauses like that one - directions that make me laugh and also that are pretty unhelpful. And a lot of ingredients that appear in the directions, but not in the ingredient list, which makes the recipe editing part of my brain go crazy.

But that's all easy to forgive. It's part of the book's charm. And if a collection of recipes that includes a "cold slaw souffle salad" - made with mayonnaise, lemon jello, cabbage and radishes - isn't charming,,,I don't know what is.
Posted by Kit Pollard at 8:14 AM