Longtime M&G readers know that I love me some food-related intellectualizing. And yesterday was a banner day for just that.

First, I ran across this FWx article about a recent academic paper, authored by a team from the University of Arizona, that examines Twitter language related to food. The map below, which shows, by state, the food term that was "trendiest" between October 2103 and May 2014. (Yes, I know that "trendiest" is not really scientific - and it's my word, not the authors' - but it's the quickest way to describe what they're trying to achieve. They eliminated words used broadly on a national scale but this study does show where words spike regionally - it's not one of those maps that shows the most distinctive word by state.) 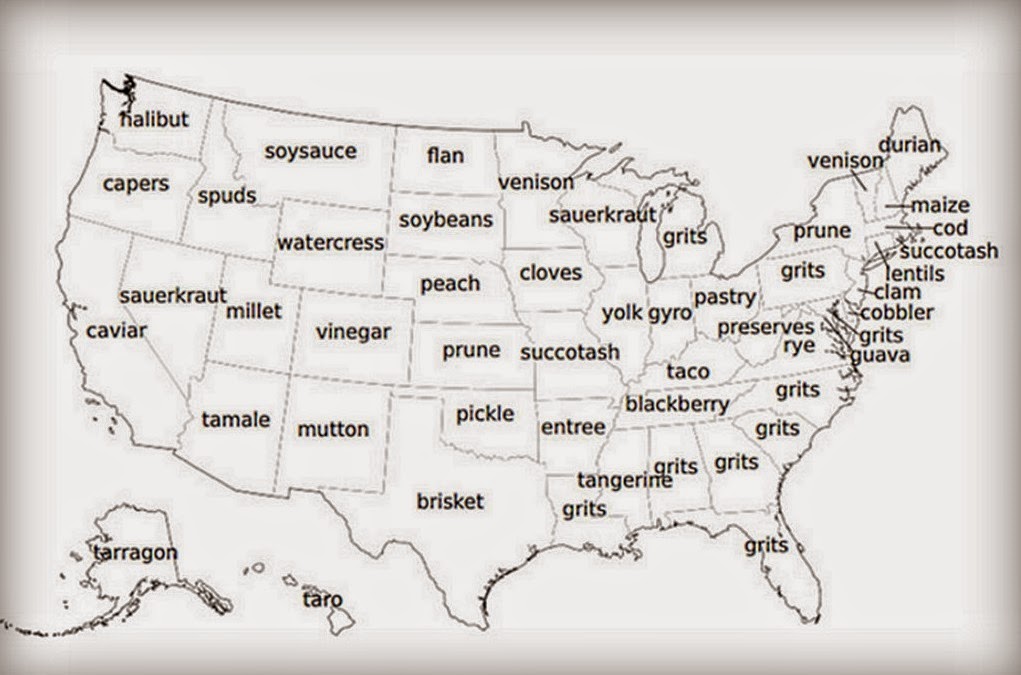 The big finding in the map above? It's all about the grits.

The paper itself is wonky but for research and/or food geeks (or both, like me) worth a read. There are some findings related to politics and health matters. Nothing wildly surprising...but interesting, nonetheless.

But that wasn't the end of yesterday's nerdy food and language reading. Last night, Cail sent me a link to this totally interesting Financial Times article about menu and review language. The article's author, Dan Jurafsky, is a linguistics and computer science prof at Stanford. He has recently published  book called The Language of Food: A Linguist Reads the Menu, which I just - a few minutes ago - downloaded to my Kindle.

I can't wait to read it, as the article has some great teasers. Like this: when describing food that's delicious, people use the language of sex to describe expensive foods ("seductive" or "voluptuous" for example) but when they're talking about cheap foods, they use the language of addiction ("craving" or "like crack").

That kind of finding is my favorite. I read it and thought, "Of course! That's exactly what happens!" - but I'd never noticed it, even though I do it in my own writing.
Posted by Kit Pollard at 12:08 PM