Making the Most of August 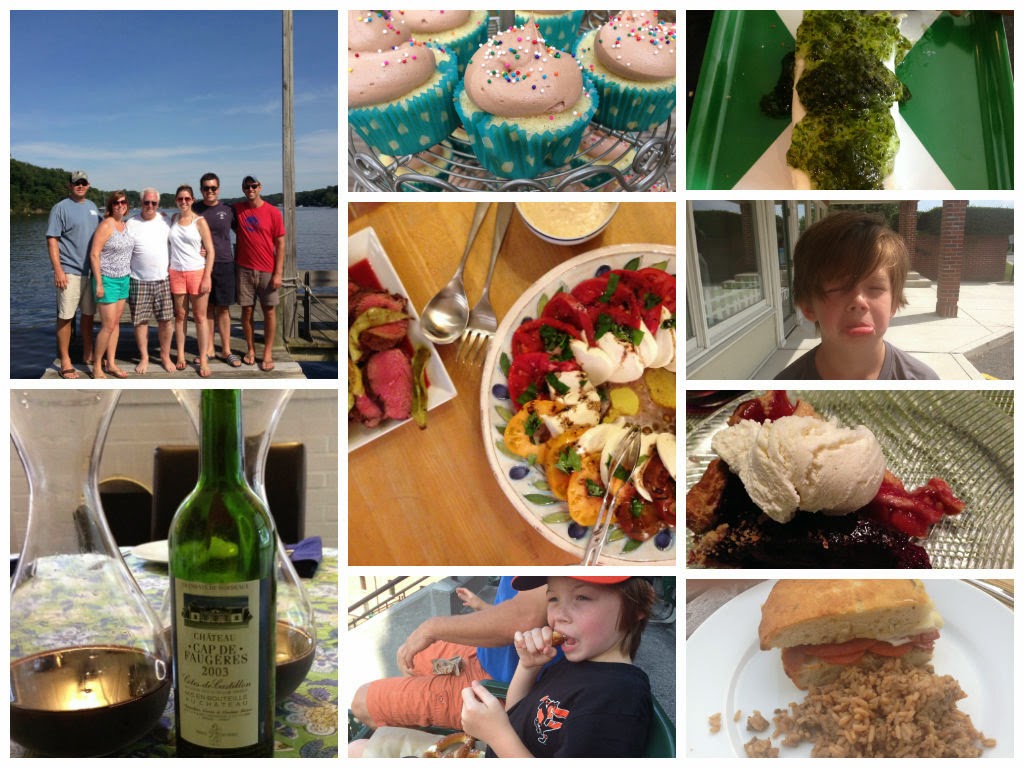 1. We're sailing! Last weekend, for the first time all summer, I had a chance to go out on the boat with my dad and brother and sister - plus Cooper and Clark (Cail was on her way home from vacation, so she didn't make it). There was absolutely no wind but it was a beautiful day, so a good time was had by all.

2. Early August cupcakes at the pool. We've been all over the happy hour/dinner hour at the pool this summer, including one random Tuesday night in early August, when Alicia made some of her best cupcakes yet. They were snickerdoodle cake with light cocoa buttercream...and so good.

3. Jalapeno jelly time. Every year, Mary's parent's neighbors, Frito and Cindy, turn a bunch of their jalapenos into a kick-ass jelly to be served over cream cheese. A little spicy, a little sweet and old school in the very best way. It's awesome.

4. Haircuts. Our deal this summer was that as long as Dixon was good, we wouldn't make him have his hair cut until it was time to go back to school. It is now time to go back to school. Yesterday, he had his mop chopped off and styled at Salon Method...and it looks great in the cutest little boy band way. He is less enamored, since his fierce lax mullet is now gone. But he looks so cute! (And it will grow back.)

5. Pie! Post-sailing, Cail arrived at my parents' house, bringing lots of fun with her, in the form of her dad...and pie! She had been on vacation in Little Compton, Rhode Island (my brother was with her for a week then he had to go back to work, so her dad joined her for a week). In Little Compton, they frequent a pie stand called Wilma's at Walker's. She brought two pies for dinner - one blueberry and one peach raspberry. They were so good words can't do them justice. Seriously, just amazing.

6. Tooloulou at Belvedere Square. One of the city's most fun carry-outs, Tooloulou, has recently relocated to Belvedere Square. I'm thrilled that it's so close by. The other night, we gorged on fig and goat cheese pizza, a muffaletta sandwich, dirty rice and a whole lot of pecan pie. Welcome to the neighborhood, Tooloulou!

7. How 'bout them O's? Seriously, how about them? We're not huge baseball fans but I love all the energy around the Orioles right now. It's so fun. We took Dixon to his first game recently. Though he lost steam somewhere around the fourth inning, he was quite taken with the swag - and the food. His new fave snack: the pretz-cho. Soft pretzels, nacho cheese...what more could you really want?

8. Busting out the good stuff. Back in early 2006, just before I found out I was pregnant, we started buying Bordeaux futures from Wells. All of a sudden, this year, we realized that it was just about time to start actually drinking some of those wines, including the 2003 Cap de Faugeres - a part of our first big purchase. Early in August, we celebrated Mary's birthday with dinner at our house and a couple bottles of the wine. It was delicious, of course, and felt very special. It's weird to start actually drinking something you've been cellaring for years. Makes dinner feel super fancy.

9. Tomatoes, tomatoes, tomatoes (in the center). We are growing them - successfully - but I also can't help buying them. They're just so gorgeous. And they taste so good. I'm in a rush to eat as many as possible before this gorgeous time of year ends.

Because it is ending...and soon. Dixon goes back to school next week and we will be back in our regular routines. I'm ready for the structure and I love the fall. But still, some days, it's easy to wish that summer would last forever.
Posted by Kit Pollard at 5:34 PM