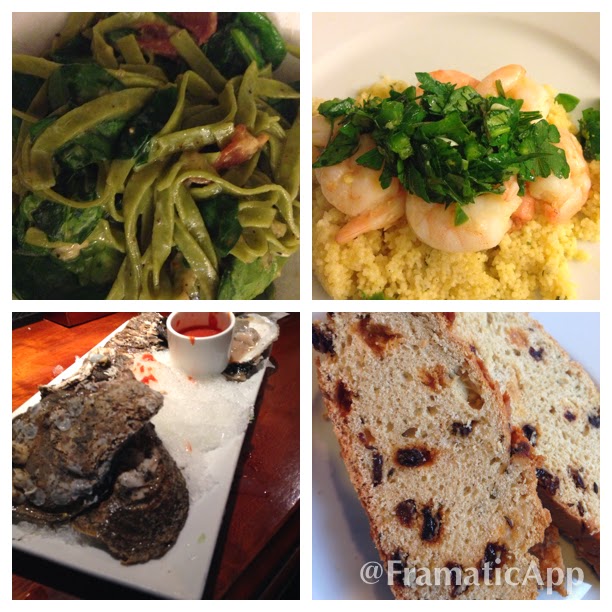 It's been busy times around here - and not just because of Fake St. Patrick's Day (though that was the most notable event going on during the past week and a half - and where the oysters, in the shot above, came from).

Last weekend, we followed Fake St. Pat's with brunch at Petit Louis with my parents and grandmother. The restaurant's consistency, both in food and service, never ceases to amaze me. As a group, we were unadventurous - quiche and salad for the ladies and croque monsieurs for the men. Pasta for Dixon (talk about unadventurous). But it was all just right.

After brunch, we had a quiet afternoon then hit Ridley Field for the Loyola vs. Duke lacrosse game, which Loyola won, handily. It was packed, cold and very exciting, especially for Dixon, who is about to start his third season tearing up the field for Kelly Post. This year, he told me this morning, he's planning to stick with defense but maybe also give goalie a try. "I like defending things that are important," he explained. "Like the goal. Or against zombies." Noted.

I've been too busy to cook much but I have given a couple recipes a try. The first, pictured on the top right of the photo above, was a roasted shrimp and gremolata dish from Bon Appetit.  I thought it was great - easy to make and super flavorful. Cooper, however, did not love it - too much parsley for his parsley-averse taste buds.

Food and Wine's spinach carbonara also received somewhat mixed reviews. It was quick and certainly healthier than regular carbonara but it didn't really wow me. Still, not a bad dinner and there's something to be said for putting a bunch of antioxidants on the plate.

This weekend, our annual celebration of all things Irish continues. Tonight, we go out in Annapolis with my high school friends - not for St. Pat's but because my friends Pete and Liz are in town from Maine. Tomorrow, rest and then Sunday, Irishy brunch here with family and friends.

I am celebrating already, by eating soda bread for breakfast (pictured bottom left). No, I didn't make it. I imagine I might make it through my whole life without ever making bread from scratch. I bought it at Trader Joe's. And it's good!

I hope everyone celebrating this weekend has a wonderful (and safe) time. Slainte!
Posted by Kit Pollard at 9:47 AM