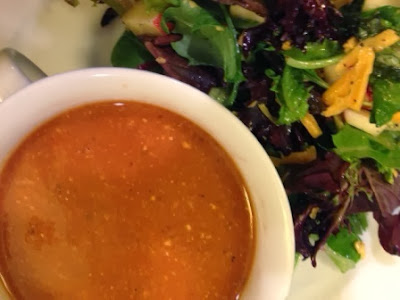 This recipe proves once again why Grace Parisi is my favorite Food & Wine recipe creator. It's from the April 2008 issue, but I just found it again online thanks to a "warming soups" slideshow that showed up in my email inbox.

It took next to no time to make, involved exactly zero weird or expensive ingredients, and was really, legitimately good. I served it with a salad of greens, apple and cheddar cheese and some crusty bread.

The only change I made - and it was an important one - was to brown a whole pound of sausage (a package of Roma chorizo) instead of the four ounces Parisi recommends. I put the bowl of sausage on the table so we could add it to our own soups, like the crouton garnish. Let's put it this way: four ounces would be OK but for, um, heartier appetites? Go for the gold.
Posted by Kit Pollard at 7:20 AM