This weekend's big food highlights, for most of Baltimore (apparently), were the reopening of the Baltimore Farmers Market (under the JFX) and the Woodberry Kitchen Oyster Festival.

The farmers market was hot and jam-packed and, as it turns out, about half of my (Facebook) friends were there, but we didn't see any of them. We did, however, have some excellent tamales, but I forgot my camera, so they'll have to exist only in our memories.

I remembered the camera for our afternoon trip to Woodberry Kitchen, though, where these were the stars of the show: 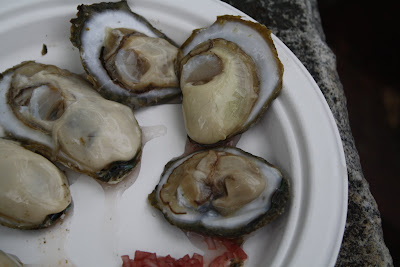 That's a mixed plate of Maryland and Virginia oysters, with cocktail and mignonette sauce on the side. The little ones were briny and my favorites. We also ate a plate of grilled oysters drenched in butter, a hot dog (I know, random), and several oyster shooters. The shooters were especially good - they came with a choice of garlic vodka or bacon rye and both were excellent.

Unfortunately, the advertised oyster fritters were a bust, and we're not sure if it was a problem with the food or with the crowd. It was crazy crowded and everybody on the WK staff seemed to be working doubletime. Apparently, the event publicity worked. This is the scene from the edge of the patio (if you look closely, you can see Cooper in a green shirt on the left): 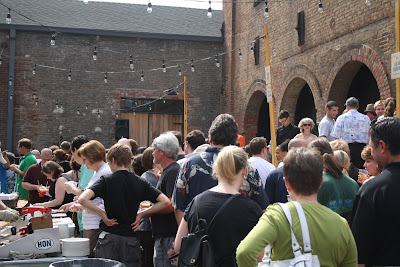 This is the same scene, from a (very) slightly different angle: 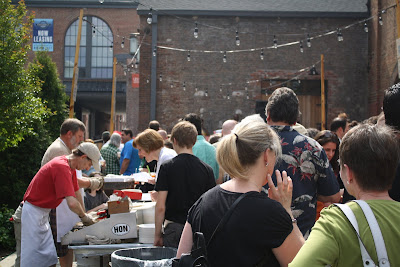 Packed, yes, and it was hot, too. But the oysters were delicious, the Black Ankle albarino was excellent, and the atmosphere was sweaty, but happy.

We did some good eating on Saturday, too, when we went to the Towsontown Festival with Mike and Alicia and their new baby Maggie. We ate homemade potato chips, funnel cake, and a fried turkey leg while the kids slept. Notice how Maggie snuggles up against the side of her bassinet, while Dixon, well, let's just say he's a little big for the stroller these days, but he can still pass out cold when he wants to: 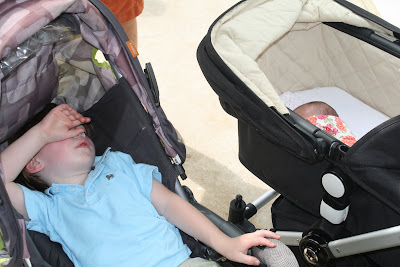 And, just because I can, here are a few gratuitous pictures of Dixon from the weekend. First, in his makeshift knight helmet: 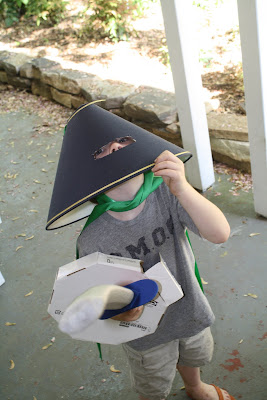 That's an IKEA clock box in his hand as a shield and, yes, an old lampshade with a hole cut for his eyes and a ribbon holding it on. It's kind of a nice combination of knight's helmet, Easter bonnet, and lampshade drunk, isn't it? Well, maybe "nice" isn't the right word. But it works: 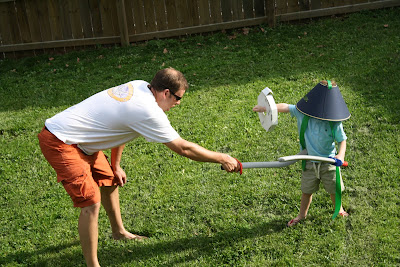 Dixon, Cooper, and Mike all put in a lot of time playing "Shining Shields" on Saturday - that's what they've named their knightly swordfights.

Finally, we closed out the weekend by inviting ourselves (and Bill) over to Cooper's Aunt Diane and Uncle Mike's house for a Sunday night cookout, which turned into three hours of Dixon doing this: 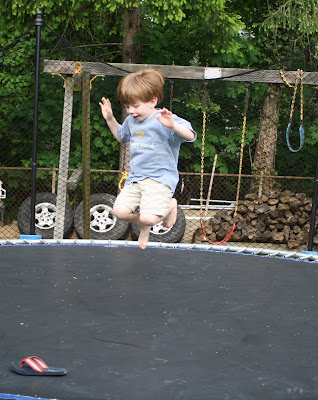 I spent about five minutes on the trampoline (in a maxi-dress) and was out for the count. Dixon, on the other hand, jumped for hours straight and still had energy to spare when we got back home. Must be nice, right?

Today, of course, it's back to work (in the rain).

dixon is sooo cute! how lucky you are to have such an adorable funny boy. Boy I'm glad we didn't stop by the oyster fest, it looked so crowded!

The oyster fest really was crowded. It was fun, but it would've been more fun if it had been about 20 degrees cooler and WAY less humid...not that there's anything WK can do about that...