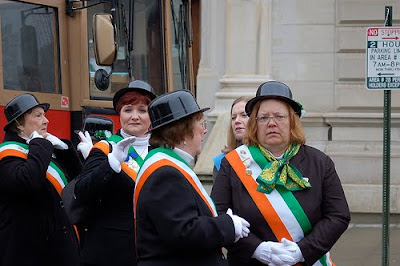 The first year Cooper took me to the St. Patrick's Day parade on Charles Street, it poured down rain. We were young and didn't care - we watched half the parade then migrated to that funny little back room at Mick O'Shea's for more Guinness in plastic cups. It was a good day and I kept reminding myself that it rains all the time in Ireland, too.

Unfortunately for this year's parade-goers, it looks like this weekend will bring more of that authentic Irish weather. We don't go to the parade anymore, since Dixon would, without a doubt, join the parade, Ferris Bueller-style, but we'll get back there one day.

If you make it downtown, there's a lot going on right on the parade route. We always stood in front of David & Dad's, which is a good spot, beer and bathroom-wise. It's also convenient if you want to get to Mick O'Shea's immediately following the parade (this year, Donegal X-Press is playing at 4, just after the parade's over, so it'll almost certainly be a crush).

This is the first St. Patrick's Day parade for B&O, too - they're right down the street from Mick O'Shea's, with great access to the parade route, and they're calling their party the "Classy Lassie Roundup," which I very much like. Among other things, they'll be serving green beer and a St. Patricks-themed specialty cocktail. And corned beef and cabbage (which I don't really like at all) and green eggs and ham.

Whatever you do this weekend, be careful and safe. It's a rainy, Irish jungle out there.