Who's seen the new J.Crew catalog? It arrived here on Saturday. I am completely taken with all of the ruffly t-shirts (which make it possible for grown women to dress like 3-year olds every day, and which make the way I already dress cool). But you know what else I loved about it? It was shot in Lisbon!

Six years ago, right about this time of year, Cooper and I were still struggling to figure out where we'd go on our honeymoon. We had two "rules" - we should go someplace neither of us had been before, and we couldn't go anywhere too far away because we needed to be at ou friends CJ and Amy's wedding in Wisconsin exactly two weeks after our wedding date.

Those two rules eliminated an awful lot of places. Nothing on the other side of the world, for one, because we didn't want to spend the majority of our trip on a plane. We'd both been to England and Scotland. I'd also been to Canada, Mexico, France, and Stockholm. Cooper had been to Ireland, Costa Rica, Spain, Australia and New Zealand (which were out anyway), and the Netherlands. We didn't really want to go to a beach - we needed a place where we could relax if we wanted, but where there were things to do so we wouldn't get bored.

It was a difficult decision - until we thought of Portugal.

We'd already sort of settled on Europe (though if we had it to do over again, we might hit South America). Neither one of us had ever been to Portugal, and we got the impression that it wouldn't be filled with Americans at every turn, so it would actually feel foreign. 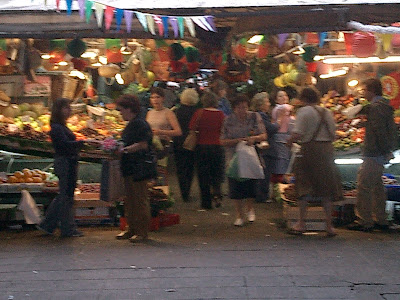 The market in Oporto. I love places where there are live chickens.

We were lucky, too - my friend DC Jason is of Portuguese descent and he and a couple of guys we went to high school with lived in Portugual for a while after college. He introduced me to a Portuguese friend of his, who gave us some great advice about what to see and where to go. We followed it and as a result, we spent one amazing night at the strangest, most fun saint's festival imaginable (picture the entire city of Oporto tapping each other on the heads with either long stalks of flowering garlic or plastic squeaky hammers): 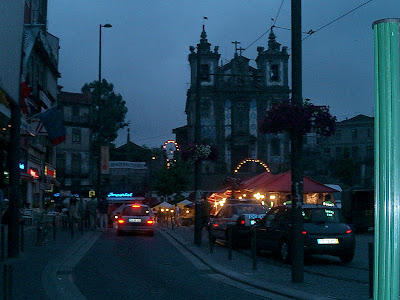 The calm before the storm of hammer/garlic-tapping in Oporto. We sat in a cafe and watched the light change over that church for, oh, three or four hours that day.

Our trip also happened to coincide with the Euro 2004 - a Europe-wide soccer tournament that takes place every four years. In 2004, the games took place in Oporto and Lisbon, so we were treated to a whole lot of national pride (and a lot of Swedish and Danish drinking songs): 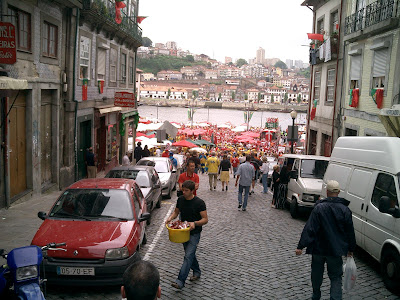 The view down to the water in Oporto on a gameday. That sea of red? Those are the Danes. They were, as a whole, very friendly and jovial and not at all hooliganish.

Overall, we loved Oporto. How could we not: 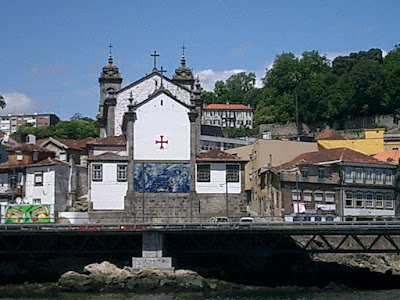 A church outside Oporto, seen from a boat cruise on the Douro River.

We started our trip with a few days in Oporto, then rented a car and traveled around for a few days, with no plans except to get to Lisbon by a set date. Our next stop, also on the advice of Jason's friend, was a tiny fishing and beach village called Nazare: 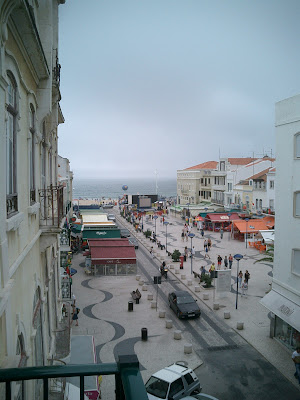 The view from our hotel room in Nazare. We watched Portugal beat England on that screen later that night. I wrote about that here. 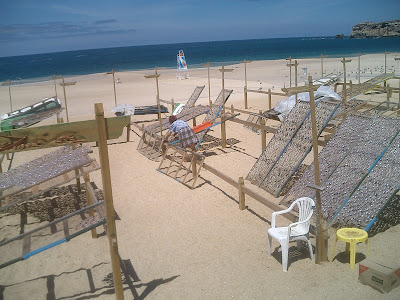 The beach in Nazare, where the fisherman dry cod for salting.

After a few fantastic days in Nazare, we drove through Obidos, a small town that has been restored to its Renaissance glory: 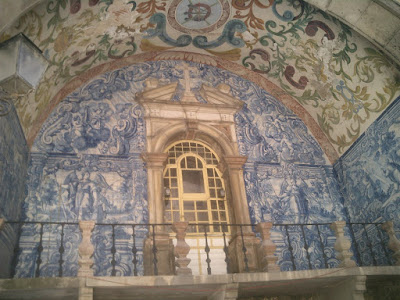 The entrance to Obidos

After a few hours, we'd seen all we were going to see in Obidos, so we drove on to Sintra, another historic town. It's just outside Lisbon, but has a decidedly small-town, historic feel: 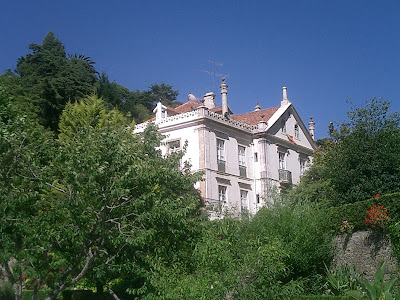 The hotel where we stayed in Sintra. No reservations or anything, and it was about $100 a night. Our room was enormous, with a gorgeous view of the lap pool on the side of the building.

After a day of walking the town, a nice dinner, we hit our second saint's festival in a week. The next morning, we left our pretty hotel behind and returned our rental car at the Lisbon airport. Our final three days were spent strolling around Lisbon and taking a lot of naps: 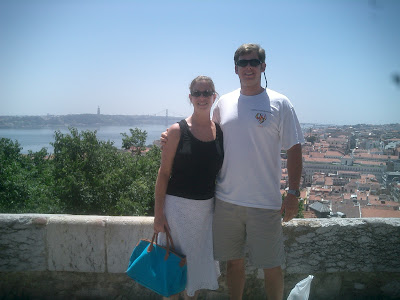 The view from the castle that presides over Lisbon. Unlike the J.Crew editors, we did not scale the steps. We thought about it, but honestly, we were just too tired by then. So we took a cab. It was a good call.

Overall, it was a fantastic trip. Full of good food, too - especially the mariscala in Nazare and anything we ate at a churrascuria. I will never tire of grilled meat.

And yes, I know I wrote about this last summer, just after our fifth anniversary. Can't help it. I like to reminisce. Plus, today it's trendy.