This is the first in a series of posts in which I cook (and scan) my way through my mother-in-law's Grand Diplome cooking magazines from the early 70s. Background about the project can be found here and the whole series is here. 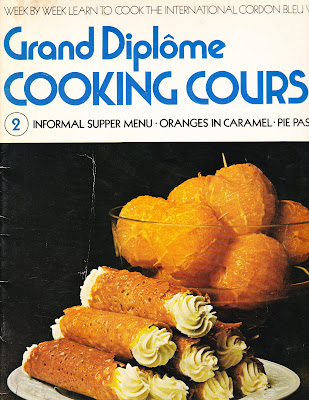 Unfortunately, one of the few issues of the Grand Diplome Cooking Course that Patsy doesn't have is the very first one, so my big project will start with issue two, which she received sometime in 1971. The consulting chef on this issue is one Serge Plat a "young traditionalist" who "presides over the classic French kitchens of the exclusive L'Etoile restaurant." Sadly, I couldn't dig anything up on Monsieur Plat (because I'm pretty sure if he was 32 in 1971, he isn't this guy on Facebook).

In issue two, we learn to boil and steam whole dinners, like an outrageously bland-sounding (and raw-looking) boiled chicken with parsley sauce: 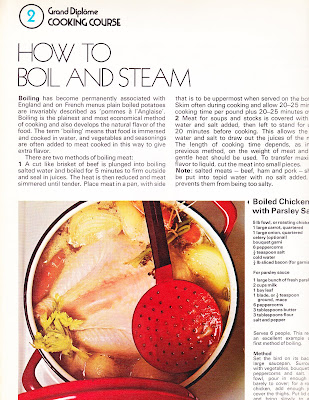 That section also includes pot-au-feu (which apparently translates to "boiled short ribs"), a New England Boiled Dinner (aka corned beef), asparagus, and calves' liver creams (which is something like pate with bechamel sauce). And for dessert...puddings. There's a section on pastry-making, too.

My interest was most piqued, though, by the entertaining focus of the cover story...since I often "invite friends to an informal supper": 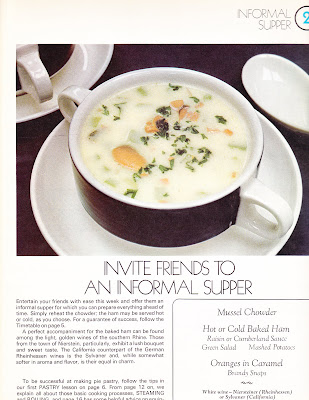 The soup looks...appetizing? Actually, it might not be so bad, though the book's suggestion to reheat a seafood chowder doesn't exactly sit well with me. The menu, in case you can't read it, includes mussel chowder ("simply reheat it"), hot or cold baked ham with raisin or cumberland sauce (which is citrusy), green salad, mashed potatoes, and oranges in caramel with brandy snaps.

The author recommends "light, golden wines of the souther Rhine" to accompany, specifically those from the town of Nierstein (or the Sylvaner from California, if you're feeling patriotic). And no, I have never heard of those wines, suggesting either a serious gap in my wine education, or a major shift in the wine world since 1971.

One feature I do like is the very specific timetable, which includes an "order of work" that starts the day before and ends by breaking down the schedule in five and ten minute increments, ending with "serve chowder" at 7:30. Anybody who's ever been to my house for a party or an elaborate dinner knows that this is something I can respect.

For this week's cooking project, I decided to make the oranges in caramel - half the dessert from the informal dinner. I would've made the brandy snaps, too, but I realized too late that I ran out of vanilla extract during one of the snowstorms, and couldn't find any at Giant during those dark days between the snows. So I'm still out, which means oranges alone it is.

The recipe is fairly simple - I was to peel eight oranges, slice them into strips and reassemble, attaching them with a toothpick (I did four). I then had to slice the peel of one orange into tiny strips and boil them for a minute, make some caramel, then pour the caramel over the oranges and sprinkle the peel on top. Nothing crazy.

The recipe page looks like this (the bulk of the oranges recipe is on the bottom of the page): 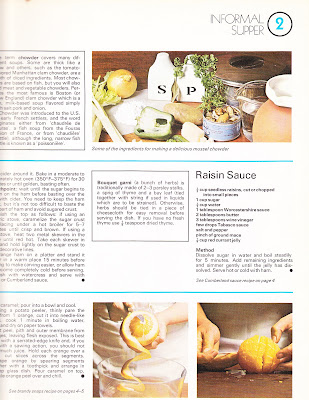 Let's take a closer look at that orange peeling:

She makes it look easy, no? Maybe it's because I don't drink as many cocktails with twists as my forebears, or maybe I just lack certain pastry chef skills, but I am nearly worthless when it comes to neat peeling and anything spiral. One of my better efforts turned out like this: 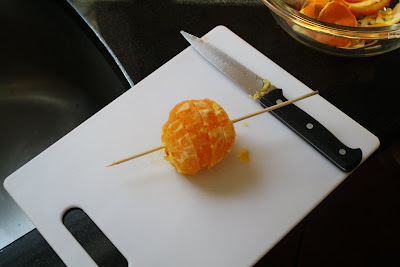 When it comes down to it, though, peeling some oranges isn't really that difficult.

Next step: make caramel. I happened to make it in a copper saucepan that my mother got as a wedding present, also in the early 70s, which I thought was a nice touch. As an aside, I use a couple of my mom's copper pots all the time. They conduct heat beautifully and I love how the copper's aged.

Back to the caramel. As many times as I've made caramel, I always manage to forget that it takes forever, so I spent quite a long time staring at the bubbles, willing the liquid to turn brown. When it finally did, one side of the pan was nearly black while the other was still a pale gold (kind of Miller Litey, if you ask me): 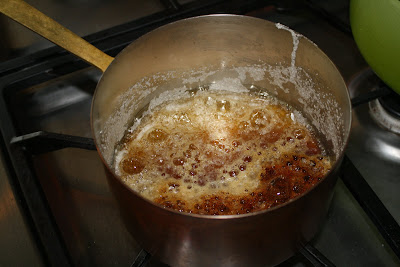 Once the caramel cooled a little, I placed the oranges in a "deep glass dish" (I used my trifle bowl, even though it was a little big for four oranges), pour the caramel on top, and sprinkle that peel (which I almost forgot to boil, but remembered at the last minute). The end result looked like this: 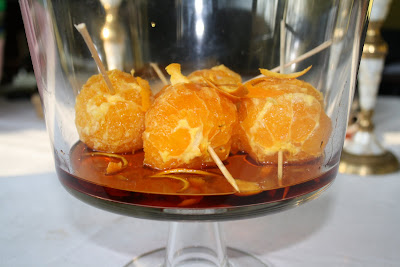 A couple of hours of chilling and we were ready to roll.

So how did it taste, you ask? Sad to report, they tasted a lot like oranges. Oranges in the mildest caramel ever. So...not exactly recommended.

All in all, issue two offered a pretty good introduction into the cooking experience of the young entertainer in 1971. The food might not have had much of a focus on flavor, but it definitely could be prepared ahead of time. Days ahead of time.