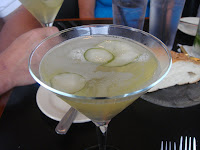 Last week, after reading Pete Wells' drinking dictionary, I was inspired. My yard is so chock full of herbs right now, I figured, it would be nearly criminal not to do a little mixing. Inspired by Wells, I dove into the mint and made a couple of totally refreshing, summery gin juleps. (I modified the recipe a bit, adding some selzer to cut the intensity of the drink, and that was a good call.)

So that was the first old drink (the julep) made with a new twist (gin).
Over the weekend, my high school friend Caroline wrote on Facebook about a drink she'd had at a restaurant in San Francisco, where she lives - a cucumber gimlet. Intriguing, right? She described it as cucumber-infused vodka, lime and a little sugar, served in a martini glass with three slices of vodka-soaked cucumber.
Drink number two: old drink (the gimlet) plus new (cucumber).
Two's not quite a trend, of course, but it's close. Also, in this case, just because something's new doesn't make it good. Case in point: the Tanqueray and pickle juice martini (pictured) I had at Bluecoast a few weeks ago. That drink even traumatized me enough to inspire a whole Deep Glamour post.
So...possibly not yet a trend and, even if it is one, maybe a bad one.
But that julep really was good. So maybe not.
Posted by Kit Pollard at 9:11 AM