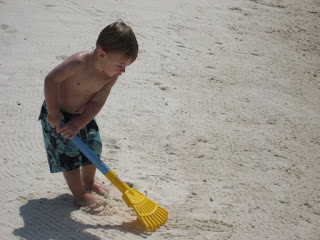 I love this time of year.

Some people love Thanksgiving, others are all about New Year's Eve. They're fine, the fourth of July is, hands down, my favorite holiday.

When I was a kid, we'd kick things off with Sherwood Forest's third of July fireworks, viewed from the water. On the fourth, we'd wake up early to go to the Severna Park parade - one glorious year, I was in the parade - then spend all day swimming at the Ben Oaks beach (on the right, that's Dixon, raking the beach last summer). At some point, I'm pretty sure our parents fed us something (though I can't guarantee we didn't just eat ice cream). We played games, like the three-legged race and the egg toss, with candy for prizes. And once it got dark, a few of the dads were dispatched to the skinny little strip of land between the pond and the river to shoot off illegal fireworks. It was great.

Since I don't liv 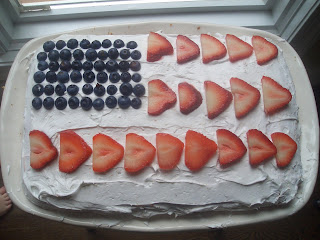 e in Ben Oaks anymore, my new fourth of July traditions aren't exactly the same, though they do capture the same spirit. We start the day off with the Towson parade, followed by an hours and hours long cookout.

Most years, I make a flag cake (the one on the left is from last year). This year, however, I'll be flouting tradition in favor of these lemon cheesecake squares (plus brownies provided by our friend Kerry and possibly a special surprise from Alicia).

Also on the menu? Piggie, of course, along with the usual summertime suspects, like corn and tomato, basil and mozzarella salad and this pasta.

Parade in the morning and pig in the afternoon. Do days get any better than that?

Happy fourth of July, everyone!
Posted by Kit Pollard at 8:37 AM

Happy 4th to you too!! We usually hit the Dickeyville parade and fireworks in Catonsville. I think it might change up a bit this year!
Enjoy!
Kristin