Dispatches from the Beach: It's the Wild Wild West Here

It's that time of year again - we're at the beach with Kyle and Mary and Mike and Alicia and Jen and Bill and Maddy and Will. All of us, eight adults and three kids and one dog, in Kyle's aunt's big house in Bethany, plus some guest appearances by Mary's brother and his girlfriend and our friends Brian and Amy and their son Jack.

Last year, we overdid it a little, scheduling four theme nights during our week. This year, we scaled back, partnering up for our nights. Last night was the first of our two theme nights: Wild Wild West hosted by Kyle and Mary and Mike and Alicia. (Saturday was just a standard cookout.)

As usual, we got into the costumes. It's amazing what you can find at Party City, and in my closet: 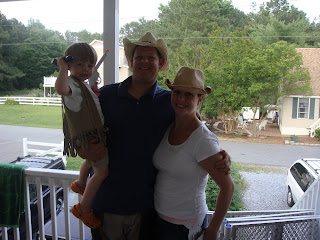 And also as usual, we had way too much food. Alicia and Mike cooked four (that's right - FOUR) London broils, plus they made a salad and mac and cheese and Alicia made Mike's mom's amazing shrimp and macaroni salad: 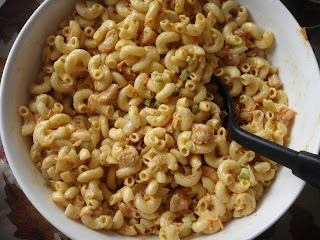 The most labor intensive part of the night, though, were Kyle's ribs. Slow cooked in the oven for a couple of hours, finished on the grill and slathered with BBQ sauce, they were super tender and had fantastic flavor. Also, very smoky: 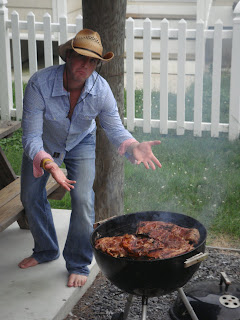 End result: fantastic food but way too much of it. The leftovers could feed a small country.

Today: beach and probaby pizza (plus leftovers). Tomorrow: la caja china makes its debut. Cooper's leaving this afternoon to pick up the pig. Alicia's breaking out her Andy Nelson's sweatshirt (she won it in a drawing) in celebration.

It's a good thing we all like pork, huh?