I was at my parents' house over the weekend, digging through old photos (mostly in search of prom photos for Deep Glamour, but that's another story). I only looked through two albums, but I found plenty of evidence that I'm not the first one in my family to enjoy a nice party. I knew that, of course, but it's always entertaining to see the evidence.

These photos are all from 1967, the year my mom graduated from high school: 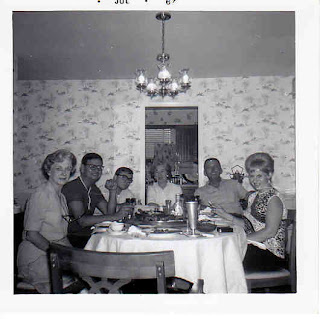 That's my grandmother at the head of the table and my uncle to her left. I'm sure my grandfather took the picture. My mom immediately knew everybody in the photo - Army friends of my grandparents. I, of course, just can't get over the cigarette at the table. Not exactly something you'd see today. 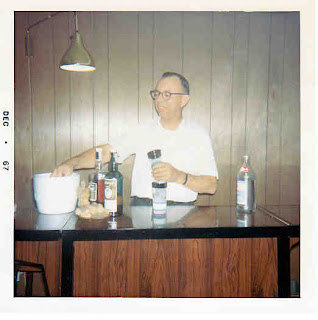 This is my grandfather, making a cocktail. I actually have his old cocktail set - it's what we use to make drinks. He and my grandmother both always drank simple drinks - scotch and water for him, bourbon and water for her. Now she drinks either white wine or MGD, but it's been a long time since I've seen her drink an actual cocktail. I'm continually surprised by their generation's ability to drink liquor - even with meals - for years and years. 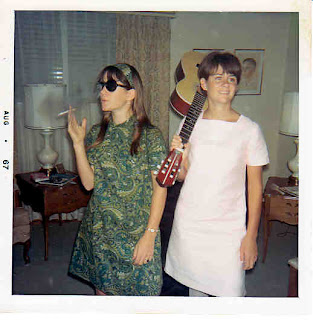 This photo, which my mom insists is a joke, is two of my mother's cousins (the one on the right made my wedding cake, actually). They're at a baby shower for another cousin. I grabbed it mostly because I love the dresses and the matching headband. But also, the one smoking is maybe 15. Probably younger. Again, my mom insists that this was taken as a joke. But even then, it was my mom's cigarette. She was 17. And they're inside. At a baby shower. Times certainly have changed quickly.

Your pics were so fun to look at!! Times have really changed!