Molecular gastronomy is not, on it's own, brand new. It's been around for over a decade now, most notably in Spain, thanks to MG champion Ferran Adria and his restaurant home, El Bulli.

Over the past year or two, though, it's been making it's way into the home. Blame it on Top Chef, maybe - as at-home viewers watched Marcel and Richard win challenges with creativity + science, ingredients like xanthan gum all of a sudden didn't sound so unfamiliar and, well, weird.

Just a week or so ago, via Facebook, Blais announced that he'll be launching a line of at-home molecular gastronomy products. A few months earlier, writer Sara Dickerman experimented in her own kitchen, wondering if the cool factor of molecular gastronomy would convince her picky four year old to eat his veggies. (Answer: no.) When French Laundry at Home blogger Carol Blymire finished with the FL book and moved on to Alinea, she added a spreadsheet to her blog, showing her readers exactly where she found all the crazy ingredients necessary to cook her way through that (gorgeous) book.

It was with all this in mind that I ventured on a little gastronomic experiment of my own last Saturday. Not even a big experiment. My plan was to make this Michael Bras recipe for slow-roasted onions with "licorice" powder. The powder in question is actually a combination of oil-cured olives that have been dehydrated in the microwave and blanched almonds that have been pulverized and roasted in the oven with demerara sugar. Not complicated, but kind of cool anyway.

Or maybe it would've been...if this hadn't happened: 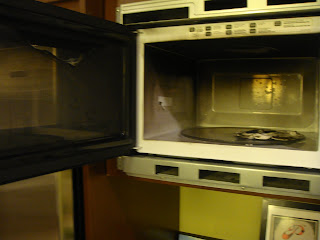 Dehydrating the olives required removing the pits, chopping them up a bit and microwaving them - on high - for 12 minutes. I stuck them in the microwave (on a perfectly microwave-safe plate) and went about my business. With five minutes to go, I ran downstairs to get a diet coke (my 10th that day, but that's another story). By the time I got back into the kitchen - maybe a minute later - I could smell the burning plastic and looked over to see flames darting around the inside of the microwave. By the time I got to the microwave to push the "cancel" button, it shut itself off (never to revive).

I called Cooper upstairs and he got the plate out of the microwave, threw it in the sink, then smashed out the fire with a pot-holder-covered hand. It took a little longer than either one of us was comfortable with - it was a tense moment - but fortunately, since the fire was contained in the microwave, there wasn't any smoke damage on the walls or the ceiling.

But wow - the smell. After opening the doors and windows for about 45 minutes, the very cold kitchen smelled better. Then, I walked upstairs and realized that the rest of the house smelled, too. Fortunately, it dissipated after a couple of hours.

So, no licorice powder. And, of course, we don't have a microwave that you can just buy at Home Depot. I'm working on that today.

Oh, and how did the rest of the dish turn out? Actually, very well. The onions, which roasted at 325 for six hours, were soft and fantastically sweet. The vinaigrette, which I made with beef demiglace instead of veal or poultry (only because I had beef demiglace already) was intense, but a nice complement to the onion. It all looked kind of cool, too. Pretty and simple: 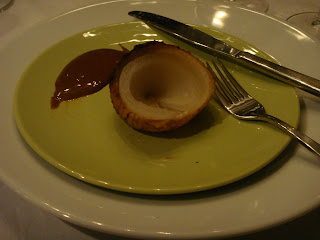 But was it worth it? Well, probably not. I'm just today realizing how much I use my microwave. I guess, though, at least I now have my really solid kitchen nightmare story.

stuff like that ALWAYS happens the day of a big party, doesn't it?? Glad to hear the microwave was the only casualty.